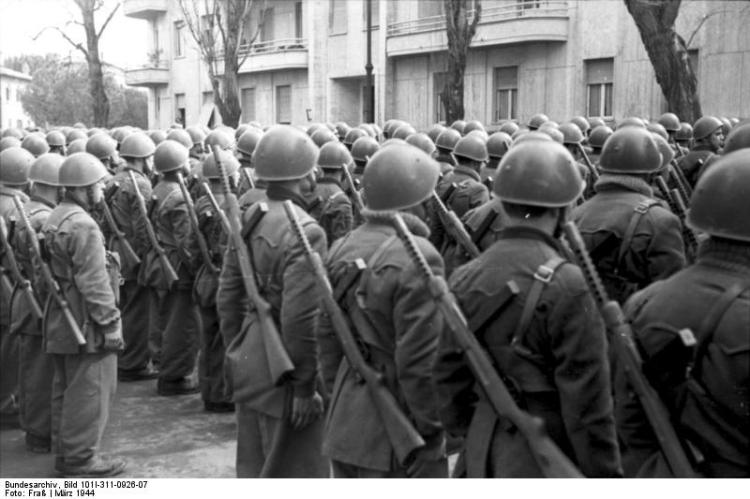 Mussolini’s dreams of glory to recreate a second Roman Empire dragged Italy fatally into the Second World War at the Third Reich’s side.

That had been his greatest mistake. His great ambition of glory and power was to set a new era and create a second Roman Empire. But history proved soon that the Duce’s ambitions couldn’t be possible. The Italian army had never been trained or have the equipment for the new type of warfare, it had been left with the mentality of the trenches war of the past and not the fast dynamic succession of events necessary in modern times to gain success, therefore they had no skill to gain any substantial victories on the battlefields with old fashion armament well behind to their opponents.

Nevertheless the regime propaganda of the time presented quite a different picture to the Italian people in the daily war bulletins, presenting the Italian Army as the winners.

At the beginning of the hostilities many trusted Mussolini’s wisdom, and praised him as the leader capable of restoring the grandeur to the country, and a possible prosperity to every Italian.

Pietro was one of those fanatics and soon became a supporter of the Fascism ideology at war. His nights to the osteria were more frequents now and passionately argued why Italians, at the end of the war, will be benefited by the Fascism new empire.

Naturally all this had become a reason to Pietro to get drunk more often, and blindly couldn’t see the great distress caused to his family.

Maria had become hysterical under the perennial tribulations caused by Pietro’s brutalities. She couldn’t rebel against that modi viventi and stoically suffered silently.

She thought her best solution was to run away from home, but then she realized to have nowhere to go.

“It is out of the question, I couldn’t possible survive without resources and, beside my younger daughters needs me.”  Maria thought.

Lucia, the eldest daughter, was fourteen now and the only one who can help in the house’s chores and capable to give her mother the moral support she needed in such distressing times. These circumstances drove them closer.

Maria, under the constant stress became weaker in her body and also her mind kept wondering of the bleak future facing her family. She felt deeply humiliated by that man that once had been a good husband and the father of her children. Now the same man showed no respect to her.

His drunken words was keeping repeating in her brain, and kept raising to higher pitches, arrogantly telling with sardonic laughs, ‘You are a puttana  Maria, yes you are even  worse than the whores in the public bordellos.’

That’s why Maria let herself go; she had lost the reason to live, lacking the consideration from who was suppose to look after her and support her.

Lucia was the only one who understood her mother’s feelings. She worried, seeing her mother losing interest in life and becoming paler and weaker. One evening she said,

“Mother, I don’t want you to wait for father any longer in the evenings. I’ll be the one to serve him dinner and what ever else he needs.”

“No Lucia, you know how brutal is when drunk. I don’t want him to harm you.”

“Mother, I’m the one who loves most. I’m always been the apples of his eyes and wouldn’t harm me. I’m sure I’ll be able to keep control of the situation. First to ingratiate him I’ll prepare the dinner he like most and then I’ll read the Mussolini’s book I just took from the library. He will listen to the story and calm down. It’s worth a try. Please mummy, I want to do this for your sake.”

Maria wasn’t sure, but reluctantly she agreed.

“I hope God will listen to you. You are a brave girl.”

Lucia did her best to prevent her father’s furies and took care that in the house all was perfectly tidy and clean to his satisfaction. She even gone to the extent of cutting a bunch of fresh flowers and put them in a vase on the kitchen table. She added a new wick to the kerosene lamp to be sure it wasn’t smoky and giving a brighter light. But more important she had for him the Mussolini’s book well in view on the table. She took good care in cooking the minestrone with the pig foot, her father’s favorite dish. Last she took care of herself, properly combing her hair and wearing her best clean dress that smelled of lavender. When it was all ready. Patiently she sat on the chair waiting for his arrival.

Time drag monotonously and it was later then usual when finally he returned home drunker then expected. Under the moonlight, Lucia saw him walking along the last leg of the cart track to their home. He, unsteadily swung from side to side of the path, and loudly mumbled unintelligible words. His drunkenness didn’t discouraged Lucia that went to open the door presenting a bright smile on her lips and welcomed him home.

“As usual that bitch is good for nothing. Getting older she’s getting even worse. I’ll teach her what her duties are.”

“Father, please sit down. Dinner is ready, and I can read to you. It’s a new Mussolini’s book telling how to benefit from the new empire.”

But Pietro at that moment wasn’t interested in the Duce’s. His eyes inspected quickly the room searching for something to complain about.

“Women? Are all the same, young or old it doesn’t matter. They only bitch around and good for nothing!”- He ranted – “The house is filthy and untidy as usual. The soup?…Don’t talk about it, isn’t even good for the pigs. Why your mother didn’t wait? That is her duty and she well knows. She didn’t tell you that at night, when I come home, she must satisfy my man’s needs.”

“Father please, understand. Mother was sick and I took her place…Nothing wrong, Father.”

“Hasn’t she told you what I’m expecting from her at night? That’s why she has to wait for me. Or has she passed over to you also the whoring business together with the rest of her duties for me?

“Of course, I should have thought of that earlier, haven’t I, Lucia? Hasn’t that been your mother’s wish? Of course… the time is ripe for you to learn the facts of life, and who better then your own father can teach you about it?”

“No Father, you can’t do that. I’m your daughter…’

Pietro was by then insane and his mind was totally fogged by the liquor and looked to Lucia with greediness.

“Father…!”  Still with a hint of fate she exclaimed.

But Pietro didn’t listened, grabbed his daughter forcing her over the kitchen table. Brutally he ripped off her clothes. Her young nude body made him insanely aroused and savagely entered her. Lucia grinded her teeth and bit her lips resisting the violence and the physical pain, but didn’t screamed suffering the carnal soreness and the moral humiliation inflicted on her by her own father. He was inhuman, and in the act against nature kept howling loudly in his bestial satisfaction. Noises enthroned from wall to wall in the house, waking everybody. No one had the guts to come to Lucia’s rescue, not even her mother. She cowardly buried her head under the pillow, with her teeth chattering noisily. In her weak mind believed such conclusion was inevitable, and after all, no one has the rights to get between Pietro’s will.

Italian born, and living in Australia. I'm writing for the past 15 years in both Italian and English language. I pubblished my first book in USA and it's available with Amazon. I also wrote several long stories which are grouped under the name "A song of Love" and several other works available in my blog in Rosso Venexiano. View more posts